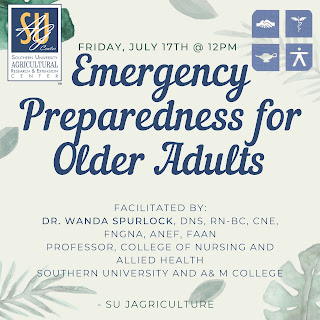 Baton Rouge, La. – The Southern University Ag Center will host the third session of its Facebook Live Series on Emergency Preparedness in the Wake of COVID-19 at 12 p.m. on July 17.

The live stream will focus on the topic of “Emergency Preparedness for Older Adults.”

“Older adults are often the forgotten demographic in instances of preparation and decision making,” said Krystle Allen, SU Ag Center Extension Associate and Facebook Live Series host.  “We aim to equip older adults with the knowledge and resources available to prepare them for unavoidable disasters. The importance is paramount; we recognize our ability to help older adults mitigate losses, but also recognize this is a public health issue,” added Krystle.

Dr. Wanda Spurlock, a professor in the College of Nursing and Allied Health at Southern University and A&M College, will be our guest during the session.

Dr. Spurlock is an expert in the care of older adults, especially those with Alzheimer’s disease and related dementias.  She has also been recognized for her expertise in emergency/disaster preparedness and has served as Co-Chair of a National Policy Expert Roundtable on Emergency Preparedness for Older Adults. The outcome of this partnership between the American Red Cross, Scientific Advisory Council and the American Academy of Nursing, was a widely disseminated white paper titled, “Closing the Gaps: Disaster Preparedness, Response and Recovery for Older Adults.”

She is recognized as a Distinguished Gerontological Nurse Educator by the National Hartford Center of Gerontological Nursing Excellence, she is also certified as an Academic Nurse Educator and holds board certifications in Psychiatric/Mental Health Nursing and Gerontological Nursing Practice. As a member of the Louisiana Dementia Partnership, Dr. Spurlock has played a key role in the reduction in the inappropriate use of antipsychotic medications in nursing home residents with dementia. She is also recognized by the Alzheimer’s Foundation of America as a Dementia Care Specialist.