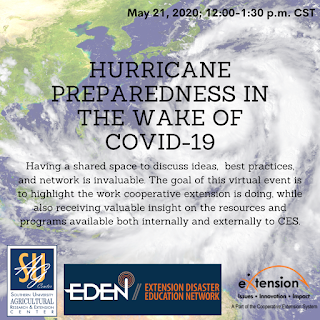 
Baton Rouge, La. – The Southern University Ag Center will co-sponsor a Virtual Town Hall on Hurricane Preparedness in the Wake of COVID-19 on May 21 at 12 p.m. (central) with the Extension Disaster Education Network (EDEN) and the eXtension Foundation.


The town hall will provide individuals with a platform to discuss ideas and best practices in preparing for the 2020 Hurricane Season. The goal of the event is to highlight the work cooperative extension is doing and share the resources and programs available to communities through the Cooperative Extension System.


Registration information for the Virtual Town Hall is available at https://bit.ly/2WICNXM. 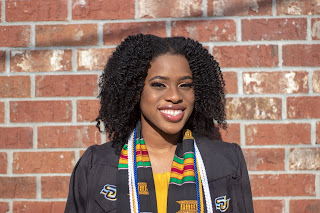 Irene Lewis, a Southern University Agricultural  Sciences major with a concentration in Plant and Soil Sciences, will graduate with the highest grade point average in the Spring 2020 Class.


Baton Rouge, La. – Irene L. Lewis, a Southern University Agricultural Sciences major with a concentration in Plant and Soil Science, has been named the University’s Spring 2020 Chief Student Marshal, the student graduating with the highest grade point average in the class.


“I am honored to serve as Chief Student Marshal to remind the Class of 2020 that we are resilient,” said Lewis, who graduated with a 3.9 grade point average.


Irene went on to say that she began college wanting to graduate as the chief student marshal but admitted that she quickly learned that a college experience is more than academics.


“I learned that my college experience was much more important than my grades,” said Lewis. “It is about the people you meet and the memories you make. I never would have thought I would experience “virtual graduation,” but here we are. I say all of that to say, even though life did not follow an exact path for me, I am


glad we can still celebrate,” she added.


The COVID-19 pandemic wasn’t the first time Lewis had a disruption from her planned path. In 2016, her home flooded days before the start of her freshman year at college.


“It was difficult starting class almost immediately after losing the home I grew up in,” said Irene. “It was even more difficult watching my family have to bounce back and my siblings adjust to moving to a new town all in a matter of months,” expressed Irene.


“I think watching how strong both my younger brother and sister were as well as having my parents, family, and friends there to love and support me helped me tremendously,” said Irene. “As I started at Southern in the College of Agricultural, Family and Consumer Sciences, I also learned that more than anything, I had a family away from home and a support system that would bring me a long way,” added Irene.


During her college career, Irene was active in several student organizations.


She was elected the National Undergraduate President of the Minorities in Agriculture, Natural Resources and Related Sciences (MANRRS) organization for the 2019-2020 year and Region IV National Undergraduate Vice President of MANRRS for the 2018-2019 year where she represented the organization’s college chapters in Louisiana, Oklahoma, Kansas, Missouri, and Texas. Irene was also active in the local Southern University Chapter of MANRRS where she served as both the Secretary during the 2017-2018 academic year and Historian during the 2018-2019 year.


Irene credits her time at Southern University for helping her grow as an adult.


“Throughout college, I learned a lot about myself and my leadership abilities. I learned that, through balancing several organizations, responsibilities, and my personal life, I needed to take time to take care of me, my needs, and my wellbeing,” said Irene. “My professors in the College of Agricultural, Family and Consumer Sciences taught me how to build a community. My interests have evolved greatly from my freshman year, but throughout, they have demonstrated that my possibilities are endless,” she expressed.


After graduating, Irene will spend the summer as an intern with the Congressional Black Caucus Foundation. During the Fall 2020 semester, she will begin working on a Masters of Public Administration at The Ohio State University, focusing on food access policy. She will also have the opportunity to complete her second year of studies while working in Washington D.C. on a fully funded fellowship.


Irene is a 22-year-old native of  Baton Rouge by way of Central, La. She is the daughter of Eric and Maura Lewis and a 2016 graduate of Runnels High School. 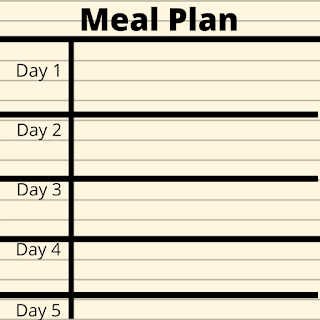 Baton Rouge, La. – Meal planning is a great way to provide healthy meals for your family, while saving money and time. It may sound complicated, but after you have done it once or twice it will become easy. Having a plan for meals, snacks, and beverages will help you balance out the food groups. Marianna Langston, SU Ag Center’s Assistant Area Agent for Family and Consumer Sciences in Union and Morehouse Parishes has provided the following steps to help make meal planning easier.


Start with a plan for one week, this will make planning easier. Decide how many meals, snacks, and beverages will be needed for the week. Plan based on what you already have, what is in season, and on sale. Include foods from all five food groups on MyPlate. Be sure to vary protein choices, use a variety of colorful fruits and vegetables, whole grains, and low-fat dairy. Choose a variety of meals that include budget-friendly meals and family favorites. Gather your recipes once you decide what you will be cooking. Make a list of ingredients needed for each recipe. Compare the items on the list with what you already have and mark them off the list.


Theme meals are an easy way to make meals fun and add variety to family meals. Have family members come up with ideas for themed meals. This gives everyone an opportunity to be a part of the planning. Some ideas for themed meals include pasta night, burger night, throwback Thursday (make childhood favorite meals), stir fry night, kid’s choice, and soup and sandwich night.

Information for this article was gathered from the USDA’s Choose MyPlate MyWins Tips: Meal Planning Made Easy and Plan Your Weekly Meals materials.


Angell aided the organization in distributing hundreds of boxes of meals to youth within the Opelousas community. The boxes contained meals for seven days, which included breakfast and lunch.


“Many kids are not eating all three meals due to school closures but the administration team at the Boys & Girls Club is trying to make sure that no kid goes hungry while out of school,” said Jordan.


The grab and go meal distributions will continue for several weeks and Jordan said she will continue to participate with this effort.


The Boys and Girls Club of Acadiana is located at 814 E. Laurent Street in Opelousas, La. For information about the organization and upcoming events, visit https://www.bgcacadiana.com.


“This will give the students something to keep them occupied and maybe some of them will even turn into successful vegetable gardens,” expressed Stephanie Elwood, SU Ag Center Extension Associate.


During the governor’s stay at home order, the staff of Front Yard Bikes has been delivering up to 150 meals daily to their students who would have normally participated in their after school programming, along with grade-appropriate academic worksheets. The SU Ag Center provided the starter kits to add to their efforts.


Front Yard Bike Shop is a non-profit bike mechanics and afterschool program. It also serves as the location of the SU Ag Center’s Growing Healthy program, which is the gardening component of the Ag Center’s SNAP-Ed program.


SNAP-Ed is the nutrition promotion and obesity prevention component of the Supplemental Nutrition Assistance Program (SNAP), the U.S. domestic hunger safety net formerly known as Food Stamps that provides economic benefits to eligible, low-income individuals and families for food purchases.  The program teaches people using or eligible for SNAP about proper nutrition and how to make their food dollars stretch further. SNAP-Ed participants also learn to be physically active.