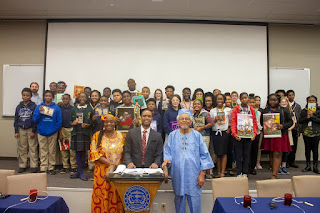 Baton Rouge, La. – For 26 years Southern University’s Black History Quiz Bowl has been held on the campus as an educational tool used to stimulate the university’s students. The competition covers a variety of topics, including current events, politics, history, sports, and entertainment.

The quiz bowl’s organizer, Dr. Owusu Bandele begin the event in 1994 after several faculty and staff decided to have a Black History program within the University’s College of Agricultural, Family and Consumer Sciences (CAFCS).  Dr. Bandele decided to host a discussion on Black Female/Male Relationships. Following the success of the event, his research associate at the time, Marion Jarvis, suggested that he host a quiz bowl, and thus the CAFCS Black History Quiz Bowl was born.

Dr. Bandele said it became his passion to educate youth about Black history after graduating from Towson State University in 1963.

“The history curriculum was taught from a white supremacy perspective, and did not include the history and contributions of African Americans,” recounted Dr. Bandele. “When I began teaching middle, and later high school in Baltimore City, I always incorporated our history in my teaching.  Likewise, in teaching agricultural courses at Southern University I always included the rich history and contributions that Africans and African Americans have made to the agricultural sciences,” he said.

“Initially, the teachers at Audubon were somewhat uneasy because much of the information that I provided in the study guide was not covered in their curriculum,” added Dr. Bandele. “However, they were pleasantly surprised at the level of preparation and outstanding performance of their students,” he added.

The Southern University Ag Center has continued to conduct Black History Quiz Bowls at the school each year.

In 2017, Dr. Bandele began conducting quiz bowls at several middle schools in the Baton Rouge area, and included high schools the following year at individual schools, culminating in middle and high school championships at the Southern University Ag Center with the best teams from each school competing.

Plaques or medallions are given to the top three teams in each division, and all participants at the championship rounds receive books written by or about people of African descent.

The COVID-19 pandemic has forced the Southern University Ag Center to postpone its 2021 Black History Quiz Bowl, but plans are underway to safely host the event.

Bandele began his tenure at Southern in 1987 as an assistant professor. He went on to obtain the rank of associate professor, and later, full professor in the College of Agricultural, Family and Consumer Sciences until the establishment of the Southern University Ag Center in 2001. In 2009, Bandele was awarded the title of professor emeritus following his retirement.